Dogmatic adherence to mealtimes is anti-science, racist, and might actually be making you sick.

Meals are good, and snacking is bad. Breakfast is the most important meal of the day, and if you eat dinner with your family, you will keep your girlish figure and your kids will be healthier. Taking a lunch break will make you succeed at your job.

Okay, now forget all that. Because as it turns out, the concept of three square meals a day has practically zero to do with your actual metabolic needs. And our dogmatic adherence to breakfast, lunch, and dinner might actually be making us sick.

Historian Abigail Carroll, author of the book Three Squares: The Invention of the American Meal, explained to me that the the thrice-daily eating schedule goes back at least as far as the Middle Ages in Europe. When European settlers got to America, they also imported their meal habits: a light meal—maybe cold mush and radishes—in the morning, a heavier, cooked one midday, and a third meal similar to the first one later in the day. They observed that the eating schedule of the native tribes was less rigid—the volume and timing of their eating varied with the seasons. Sometimes, when food was scarce, they fasted. The Europeans took this as “evidence that natives were uncivilized,” Carroll explained to me in an email. “Civilized people ate properly and boundaried their eating, thus differentiating themselves from the animal kingdom, where grazing is the norm.” (So fascinated were Europeans with tribes’ eating patterns, notes Carroll, that they actually watched Native Americans eat “as a form of entertainment.”)

The three daily meals that the settlers brought evolved with Americans’ lifestyles. As people became more prosperous, they added meat to breakfast and dinner. After the Industrial Revolution, when people began to work away from home, the midday meal became a more casual affair, and the cooked meal shifted to the end of the day, when workers came home. The one thing that did not change was the overall amount of food that people ate—despite the fact that they had largely abandoned the active lifestyles of the farm in favor of sedentary ones in cities and suburbs. “People were still eating these giant country breakfasts,” says Carroll. Soon, doctors reported that more of their patients were suffering from indigestion.

In an effort to rein in caloric intake, nutritionists began advising people to eat a lighter breakfast—and marketers pounced on the opportunity. In 1897, brothers Will Keith Kellogg and John Harvey Kellogg introduced corn flakes as healthy alternative to heavy breakfasts. (The pair had an ulterior motive: They wanted to spread the gospel of the vegetarian diet because it was part of their Seventh Day Adventist faith.) 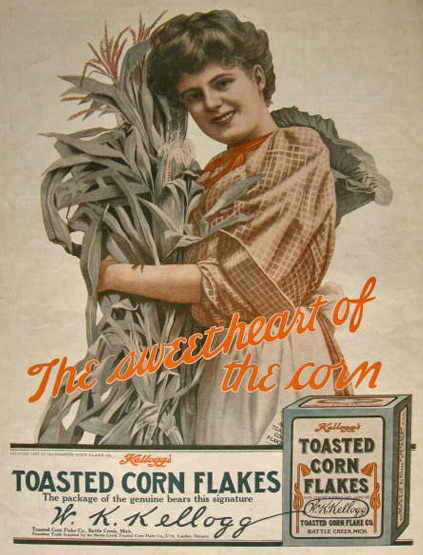 Corn flakes took off, and in the years that followed, breakfast became known as a meal for health food. Fruit-grower associations seized the opportunity to market juices, which, the ad campaigns announced, were chock full of a newly discovered thing called vitamins. The makers of breakfast foods warned of the dangers of skipping “the most important meal of the day.”

That line of reasoning persists today—check out Kellogg’s modern-day treatise on the health benefits of breakfast. But there’s just one problem: Science shows that when it comes to maintaining your metabolism—the bodily system that helps us turn food into energy and, when out of whack, can lead to diabetes and other disorders—it doesn’t make a whit of difference whether you eat breakfast or not. A 2014 study by the University of Bath showed that breakfast had practically zero effect on its subjects’ metabolism. (Breakfast eaters did burn more calories than breakfast skippers, but net calorie consumption was the same, since the breakfast eaters burned off the extra calories they ate at breakfast.) A similar University of Alabama study of people who were trying to diet found that breakfast made no difference, either way, on weight loss.

And breakfast isn’t the only metabolically unimportant meal. In fact, it doesn’t seem to matter much at all how and when you get your calories. In a 2010 study published in the British Journal of Nutrition, one group ate three meals a day while another ate six. (Total daily calorie counts were identical.) Researchers found no weight or hormonal differences between the groups. In 2014, University of Warwick researchers found no difference in metabolism between a group of women that ate two meals a day and another group that ate five.

The one thing that might actually improve your metabolism is periodic fasting—that’s right, the very same eating pattern that the early European settlers deemed uncivilized. Mark Mattson, a neuroscientist at the National Institute on Aging, has observed in a series of mice experiments over the past two decades that mice who skip feedings are leaner and live longer than their nonskipping counterparts. The fasting mice also have more robust brain cells than those who consume regular meals. Mattson, who skips breakfast and lunch most days, theorizes that caloric deprivation acts as a mild stress that helps cells build up their defenses—warding off damage from aging, environmental toxins, and other threats. Other research has shown that periodic fasting may also prevent heart disease.

Biologist Satchidananda Panda of the Salk Institute for Biological Studies, meanwhile, observed in a 2012 study that mice consuming all of their calories within an eight-hour window were less likely to develop metabolic diseases like diabetes than those who ate whenever they pleased. A follow-up study last year confirmed the results—though no one has conducted similar studies in humans.

So should you quit meals and fast intermittently instead? You could try it. Christopher Ochner, a weight loss and nutrition expert at Mt. Sinai Hospital in New York, notes that there’s no one-size-fits-all solution: Some people do well eating all their calories at once; others prefer to split them into snack-size portions.

Instead of obsessing about meal size and frequency, Ochner recommends something simpler: Don’t eat when it’s time for a meal; eat when you feel hungry. That, he says, is a lost art: In industrialized societies, where food is abundant, we eat because of social cues “or just because something smells good.” If we can teach ourselves to pay attention to our own bodies instead of our environment, he says, “that might be the best diet of all.”

Kiera Butler is a senior editor at Mother Jones. For more of her stories, click here.
source: www.alternet.org

2 thoughts on “Maybe You Should Stop Eating Breakfast, Lunch, and Dinner”