This essay is part of a column called The Wisdom Project by David Allan, editorial director of CNN Health and Wellness. The series is on applying to one’s life the wisdom and philosophy found everywhere, from ancient texts to pop culture. You can follow David at @davidgallan. Don’t miss another Wisdom Project column; subscribe here.

“What is the meaning of life?”

It’s one of those enormous questions that’s so important — both philosophically and practically, in terms of how we live our lives — and yet we rarely, if ever, stop to really think about the answer.

Given that you might be able to formulate your response in less than a minute, the wisdom-to-effort ratio for this philosophical exercise could not be more advantageous.

And having an answer may even improve your health and help you live longer.

A new study published Tuesday in the Journal of Clinical Psychiatry examined the relationship between our physical and mental well-being and the search for, or presence of, purpose in life.

After studying 1,300 subjects from ages 21 to more than 100, the authors found that older people were more likely to have found their life’s purpose, while younger people were more likely still searching. That’s logical, given that wisdom is often born from experience. According to research by Stanford education professor William Damon, the author of “The Path to Purpose,” only 20% of young adults have a fully realized sense of their life’s meaning.

And according to the new study, the presence of meaning in one’s life showed a positive correlation to one’s health, including improved cognitive function, while searching for it may have a slight negative effect. Mental and physical well-being was self-reported, and having a sense of purpose tended to peak around age 60, the study found.

According to two other studies published in 2014 — one among 9,000 participants over age 65 and another among 6,000 people between 20 and 75 — those who could articulate the meaning and purpose of their lives lived longer than those who saw their lives as aimless. It didn’t seem to matter what meaning participants ascribed to their life, whether it was personal (like happiness), creative (like making art) or altruistic (like making the world a better place). It was having an answer to the question that mattered.

The connection to longevity could be causal — having purpose may help one cope with daily stress, as other research has shown — but it could also be that those who think about life’s meaning are more likely to do other activities that promote good health.

Or as the philosopher Friedrich Nietzsche is quoted as saying, “He who has a why to live for can bear almost any how,” nicely summing up the connection between having purpose and forbearance in one’s life. 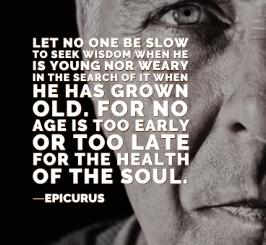 The easiest but perhaps healthiest resolution you could make in the New Year may be to simply ask yourself what the meaning of life is for you. What gives you purpose? Why are we all here?
Every January for more than two decades, I have taken a few moments to ponder the answer to the question.

The reason I ask it annually is because my answer changes over time, which I find interesting and insightful. There is no objectively correct answer, I believe, only answers that are right for you at any given time.

Great thinkers (and celebrities) have given the question thought, so you can look to the words attributed to them for inspiration. Aristotle, the Greek philosopher who lived 2,500 years ago, is believed to have written that the essence of life is “to serve others and to do good,” and the Roman philosopher Cicero, born 280 years later, came to the same conclusion. As did Russian author Leo Tolstoy, who wrote, “The sole meaning of life is to serve humanity.” And His Holiness the Dalai Lama added, “if you can’t help them, at least don’t hurt them.”

Scottish rugby legend Nelson Henderson put the same notion poetically when he said, “The true meaning of life is to plant trees, under whose shade you do not expect to sit.” And actress Whoopi Goldberg’s meaning-of-life metaphor was to “throw little torches out to lead people through the dark.”

“Love” was the conclusion of Trappist monk and writer Thomas Merton, and “Buffy the Vampire Slayer” actress Julie Benz. Alternatively, actor Arnold Schwarzenegger concluded, “The meaning of life is not simply to exist, to survive but to move ahead, to go up, to achieve, to conquer.”

My favorite answer, though, is the Zen-like circular reasoning attributed to writer Robert Byrne, who put it, “The purpose of life is a life of purpose.”

Some have concluded that life’s meaning is subjective. “There is not one big cosmic meaning for all,” Anaïs Nin wrote in her diary. “There is only the meaning we each give to our life, an individual meaning, an individual plot, like an individual novel, a book for each person.”

I agree, which is why I recommend formulating your own answer. “Each man must look to himself to teach him the meaning of life. It is not something discovered: It is something molded,” wrote Antoine de Saint-Exupéry, well-known for his book “The Little Prince.”

Taking a few moments to record your answer to the question “what is the meaning of life?” is the kind of simple exercise that effectively adds meaning to your life.

And then I suggest answering it every year. Looking back at how your thinking has evolved and been influenced by experience tells you something more about yourself. Cumulatively, it gets you closer to a deeper self-understanding.

In 1997, my answer was “the discovery, pursuit and attainment of one’s bliss,” inspired by myth expert Joseph Campbell. A year later, is was to make “the world a better place.” In 2002, the year I got engaged, it was simply “Love.” And the year we conceived our oldest daughter, it was the less-romantic “continuation of one’s DNA to the next generation.” But most years, my answer is some combination of love, legacy, happiness, experience and helping others.

As a practical matter, if you want to do the annual “Meaning” exercise, I suggest not looking at past answers before answering anew, to avoid biasing your answer. I write them down on the same now-yellowing piece of loose-leaf paper, and keep it someplace safe.

The last use of this experiment is to try to turn your answer into action. If you conclude, as Tolstoy and Aristotle did, that the meaning of life to help others, that should help motivate you to do more of it. If “love,” is the answer, then love more. If it’s “find your bliss,” then get searching for it.

This is not a theoretical exercise. Whatever small step you make toward finding the meaning of life is a step toward a more meaningful, and longer, life.

4 thoughts on “Asking Yourself ‘What’s the meaning of life?’ May Extend It”