Your partner drops the ball and forgets to pay rent on time. You’re hit with a late fee. The practical thing to do? Come up with a solution so it doesn’t happen again. But you’re angry, so instead, you criticize your partner, and a fight erupts. Criticizing is one of seven common habits that can destroy healthy communication.

We all know how important communication is to just about any relationship. Unfortunately, it doesn’t always come easy. Psychiatrist William Glasser came up with the concept of the “seven deadly habits” of communication. In basic terms, the idea is that most of us have a handful of habits we’re accustomed to, and those habits are destructive to our relationships. If we can reframe them and choose better habits (what he called the “seven caring habits”), we can improve our communication, and therefore, our relationships. 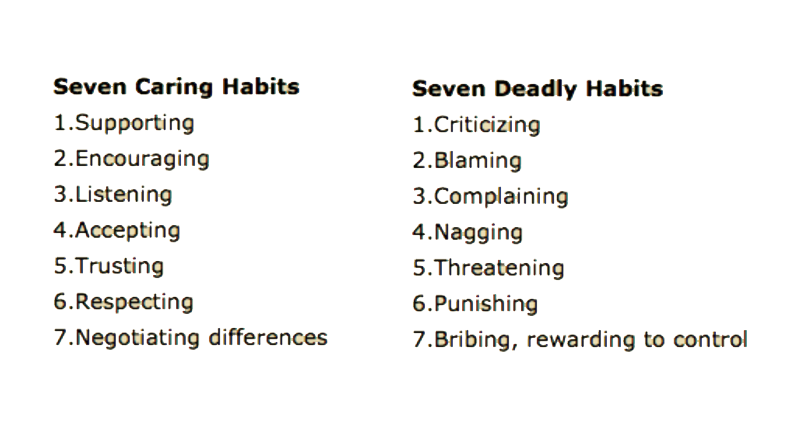 Assuming the relationship is otherwise healthy, here are seven second-nature habits that get in the way of solid communication.

People criticize for a lot of different reasons. Maybe you want to help your employee better manage a project. Maybe a friend keeps making bad relationship choices, and you feel the need to let her know.

Those examples more or less come from a positive, constructive place, and that’s okay. In those cases, it’s less about criticizing and more about offering constructive feedback. However, in the context of poor communication, criticizing is when you knock someone down for the wrong reasons. Zen Habits offers a few of these examples:

It’s easy enough for someone to get defensive when they’re given constructive criticism. But when your criticism comes from a destructive place, there’s no reason for the other party to keep listening: it’s a communication killer.

For example, if you’re a parent and your child keeps making terrible grades, it’s easy to get frustrated and immediately knock him or her down for being a slacker. If you want to improve communication, what Glasser would probably suggest is to focus less on criticizing and more on offering feedback to support and encourage their improvement. In fact, support and encouragement are two “caring” habits Glasser listed for more effective communication.

When you blame someone, you take any responsibility off of yourself and put it on them. And hey, it may very well be your husband or wife’s fault that your mortgage is late because they didn’t pay it. But as far as an open dialogue is concerned, pointing fingers does little good.

It’s understandable that you want to express your dissatisfaction with something. And sometimes you need to express it order to find a solution, but that’s not quite blame. For example, let’s say you’re working on a project, and one of your team members forgets to complete a task by deadline, throwing everyone off schedule. You want to make sure the employee knows they’re responsible for this mishap, so you might say something like,

“Heads up: it’s critical for us to make deadlines so that the overall project gets done on time. Are these due dates working for you?”

Blame would be something like, “You missed this deadline and now we all missed our deadlines.”

The first example is focused on a solution and gives the employer an option to do better next time. The second is just a dead end. Aside from apologizing, what does someone say to that? It kills communication.

I hate to admit it, but I complain a lot. And it can take a toll on the person listening. Once, when I returned home from a trip, my significant other took me out to dinner, and I complained about pretty much everything that happened during my travels: from the seat on the plane to rude drivers on the way home. Finally, he said, “Okay, I can’t take anymore. You’ve been non-stop ‘venting’ since you got home.” (Venting is my key word for complaining).

He’d disconnected from the conversation because, well, there wasn’t really a conversation to be had. It was just me hating everything. “But I’m not complaining about you,” I argued. “I know,” he said, “But still. It’s exhausting.”

Complaining is exhausting because it puts pressure on the other person. Counselor Laura Schenck puts it like this:

Complaining often results in the other person feeling as if they should somehow “fix” the problem or else just get away from the complaining. Whatever the outcome, it puts distance between us and those we love.

Even if it feels good to get things off your chest, venting can be counterproductive. Over at Psychology Today, clinical psychologist Dr. Lisa Juliano says that people complain for a few different reasons:

While friends or loved ones might be up for letting you vent, they’re probably going to lose interest when venting turns into ineffective complaining, and it usually does. At some point, the listener disconnects from you. Juliano suggests asking yourself these three questions to keep your complaints from getting out of hand:

As she points out, everyone complains, and sometimes it serves a purpose. But when it comes to communicating, nothing can shut down a conversation like pointless, going-nowhere complaining.

Nagging is persistently bothering someone to do something you want them to do. By definition, it’s a communication breakdown. Think about it: if you’re nagging someone, you’re not getting through to them for one reason or another. It’s unproductive. Psychologist Molly Howes writes:

The nagging pattern is a demonstration of the remarkably consistent but dumb belief we all have that, if what we’re doing isn’t working, the solution is to do more of it. This pattern is self-perpetuating, with each person repeatedly reacting to the other’s behavior in virtually the same way.

No one likes being nagged, and no one likes nagging, yet it’s a fairly common relationship problem. So how do you stop nagging and start communicating more effectively? The answers are simple, but not easy: it comes down to breaking the pattern of nagging-resisting and instead learning to compromise and empathize. We’ve discussed how to break this pattern with your children. For example:

One tip Howes suggests to break the pattern is to establish a deadline. If you need someone to do something, compromise on when they’ll do it, with the caveat that you won’t bring it up again. This breaks the cycle of nag > resist > nag. The other party has agreed to do something, and you’ve agreed to stop talking about it. Whether they actually do it is another story (again, simple but not easy), but this at least stops the pattern.

It’s fairly obvious how threatening someone can shut down communication: it doesn’t leave room for discussion at all. It’s a one-way street. As Schenck puts it, when we threaten someone, we become a source of fear and control. That doesn’t exactly lend itself to great communication.

This is why ultimatums suck. Sure, there are times when you might need to give an ultimatum in order to get past a road block in a relationship. But many times, people use an ultimatum as a threat in order to manipulate others.

We’ve pointed out before why threatening doesn’t work, even with parenting. First, you teach your kids to use ultimatums or brute force to get what they want. Second, they might call your bluff. And perhaps most importantly, you’re damaging your connection with your child.

Glasser pointed to trust and respect as a more caring response. When you trust someone, you don’t feel the need to control them. You also allow yourself to open up, which is a lot more conducive to effective communication. This hilarious post from Scary Mommy points out why common threats don’t work, and how you can revise them to be more effective. It’s tongue-in-cheek, but it makes a good point about how explaining reality to your children is a better solution. For example:

THREAT: ‘Brush your teeth, or they’ll turn green and fall out of your mouth.’

Problem: Kids really don’t care at all about what happens in the future unless by “the future” you mean the next eight seconds.

Revision: ‘If you don’t brush your teeth, they’ll get this weird orange film on them. Look at your little brother’s teeth. See that stuff on them? He has that because he’s 2 years old and insane and screams if we try to put a toothbrush in his mouth. Also, if you don’t brush, you’ll have to go to the dentist, and even though I’ve said his office is awesome and super fun and a place that gives you stickers, it actually kind of sucks, and you want to avoid it at all costs.’

This works with relationships, too. Instead of threatening your partner if they don’t do something, open up about why your request is important. The bottom line: explaining means you trust and respect someone enough to tell them why something matters, and that lends itself better to communication.

Threatening goes hand in hand with punishment: it’s about controlling someone’s behavior through negative reinforcement. Manipulation and control don’t pave a great path for communication. Communication is a two-way street, and control is only about one person. Instead, Glasser promoted respect.

On the other hand, when it comes to parenting, you do have to discipline your kids sometimes. However, effective discipline is not about punishment, it’s about teaching. In fact, the word discipline actually comes from the Latin word “ disciplinare,” which means, “to teach.” Effective discipline is never about punishment, but about guiding and managing your child’s behavior. The line between the two is blurry, but it’s mostly about the intent: punishment is focused on the bad behavior, whereas discipline is focused on improvement. For example, if your child gets a bad grade, punishing them with a spanking doesn’t necessarily teach them anything other than “make good grades so I don’t get spanked.” On the other hand, disciplining with less play time and more tutoring teaches them that learning is a priority.

Of course, discipline applies for parenting, but friendships and relationships are a little different. Discipline isn’t involved, because there should be equal footing.

Bribery works in the same way. It’s nicer, but it’s still focused on control—it’s just a little more manipulative about it.

But then, what’s the difference between bribery and say, rewarding your child for good behavior? Over at WebMD, parenting educator Elizabeth Pantley explains:

Like a lot of these habits, it’s all about the intention. With a reward, you’re communicating to your child what desireable behavior is. But with bribery, you really don’t care if your message gets through, you just want them to stop throwing a tantrum. I mean, sometimes you do what you have to do as a parent, but ideally, you want to avoid bribery, because it shuts down the flow of communication. When your child, friend, or partner does something you want them to do via a bribe, it’s not because they truly understand you, but because they want the reward. You lose the connection.

Instead of bribery, Glasser said negotiating a compromise is better for communication. It makes sense: negotiating is about coming to a mutual agreement, and that involves the other person’s thoughts, feelings, and actions. In addition, a couple of his other “caring habits” apply here, too: compromise also involves listening and respect.

In general, these habits don’t exhibit empathy. And when you think about it, empathy is really what’s necessary for great communication. When you can see the other person’s point of view and understand where they’re coming from, that’s effective communication in a nutshell. Learning to recognize these seven “deadly” habits can help your relationships thrive, because you learn to stave off communication roadblocks and see their other person’s perspective a little better.