If you want to eat healthy, you’ll need to forgo fast food, which is high in sodium, sugar and grease. A new study supplies even more incentive to do so by finding that fast food is a source of chemicals called phthalates, which have been linked to a list of possible health burdens like hormone disruption and lower sperm count.

The new report, published in the journal Environmental Health Perspectives, found that people who ate more fast food also had higher levels of two substances that occur when phthalates—which make plastic more flexible—break down in the body. “The same range of concentrations measured in this [group] overlaps with the range of concentrations that have been measured in some of epidemiological studies that find adverse health effects,” says study author Ami Zota, an assistant professor of environmental and occupational health at the George Washington University Milken Institute School of Public Health.

Prior studies have shown that diet is a source of exposure for plastics chemicals like phthalates and Bisphenol A (BPA), and that processed food may be of particular concern. The new study is the largest to look at exposure from fast food fare specifically. 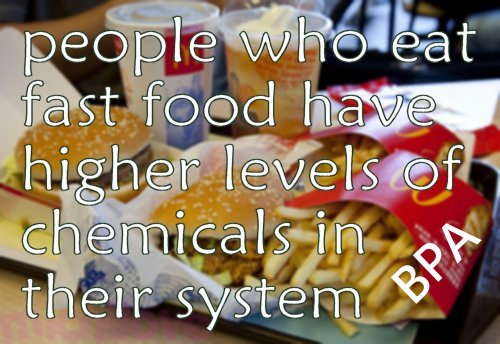 To reach these findings, Zota and her co-authors looked at data from more than 8,800 people who were part of a survey where they detailed all the food they ate in the last 24 hours and then provided a urine sample. Two specific phthalate byproducts were identified: DEHP and DiNP. People who ate 35% or more of their total calories from fast food in the last 24 hours had around 24% higher levels of DEHP compared to people who didn’t eat fast food, and close to 40% higher levels of DiNP. The team also looked for traces of BPA, but did not observe a pattern.

In general, about a third of all the people in the study had eaten fast food in the prior day. “That’s a lot,” says Zota. “That alone tells you the public health impact of this type of food preparation.” It’s believed that phthalates could leach into food during preparation or packaging. Plastic gloves and conveyer belts could be sources, Zota says, and heat from cooking may also make it easier for chemicals to get into food.

The researchers say they hope the findings provide insight into how chemicals can enter our bodies. More research is needed to fully understand what effects these chemicals may have over time. “Our study helps shed light on one potential way that people can reduce their exposure to these chemicals through their diet, but it also points to a broader problem of widespread chemicals in our food systems that will require many different types of stakeholders to get involved in order to fix it,” Zota says.

2 thoughts on “How Fast Food Messes With Your Hormones”