Green tea is touted as an amazing superfood replete with many healing benefits, from its anti-cancer properties to its heart health boosting compounds. So it is no surprise that green tea has been linked with the prevention of Alzheimer’s disease. But new research found that it may offer more protection than originally believed.

Green tea is high in antioxidants that fight off harmful free radicals. By some estimates the antioxidants found in green tea may be 20 times more potent than vitamin E, which is a proven brain health booster. But new research shows that green tea is even better than just its amazing antioxidants.

According to a new study by scientists at McMaster University in Hamilton, Canada, and published in the Journal of the American Chemical Society found that epigallocatechin gallate (EGCG) has yet another health benefit—it stops beta amyloid plaques linked to Alzheimer’s from forming. Beta amyloid plaques have long been known as causal factors in Alzheimer’s but finding ways to stop the harmful plaques from forming has been the task of many researchers. Beta amyloid plaques disrupt communication between brain and nerve cells, creating the memory loss and dementia, which are the trademark signs of Alzheimer’s disease.

This new research found that EGCG in green tea effectively prevented plaques from being able to damage healthy cells. While the exact mechanism by which EGCG achieves this protection is not fully clear, the discovery is an exciting one into brain health and Alzheimer’s disease.

This ground-breaking research offers hope to the 50 million people worldwide who already suffer from Alzheimer’s disease since EGCG may slow the plaque’s progression and therefore the disease’s progression as well. It may also help anyone looking to prevent the disease, which is probably most people. 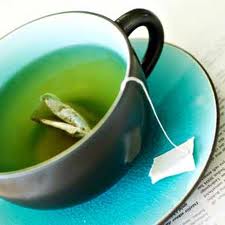 While the research is still quite early so it is not clear exactly how much green tea or its protective compound EGCG is needed to reap the brain protective effects, most experts agree that a few cups of green tea daily should be helpful with brain health. Earlier research published in the American Journal of Epidemiology found that people who drank two or more cups of tea each day were less likely to develop Parkinson’s disease. The benefits were not linked to tea’s caffeine content which is lower than the caffeine found in coffee.

To make green tea: add one or two teaspoons of green tea leaves to a cup of boiled water, preferably in a tea strainer. Let steep for five minutes. Pour over ice if you prefer a cold beverage.  And don’t worry—it contains a lot less caffeine than coffee or black tea. Green tea contains about 55 mg of caffeine per cup while coffee typically contains between 125 and 200 mg per cup.

If you’re not a big fan of the taste of green tea, try it blended with other types of tea, such as ginger or lemongrass. You can also try icing it with some stevia to sweeten the beverage and a squeeze of fresh lemon juice for a delicious green tea lemonade.

Dr. Michelle Schoffro Cook, PhD, DNM is the publisher of the free e-newsletter World’s Healthiest News, president of PureFood BC, and an international best-selling and 20-time published book author whose works include:  Boost Your Brain Power in 60 Seconds:  The 4-Week Plan for a Sharper Mind, Better Memory, and Healthier Brain.