Life in the 21st century has become sedentary for many people. Modern entertainment, fast food, lack of time, etc. contributes to only about 4 out of every 10 people exercising on a regular basis. As a result, many people find it very hard to lose weight and keep it off.

There is some good news though; recent studies have shown that spicy foods can curb appetite and speed up metabolism and thus have a fat burning ability. “How?” you might ask. Hot spices, especially chiles, may inhibit overeating because they contribute to satiety, the feeling of fullness after eating. Not to mention it may be more difficult to overindulge in a hot, spicy food due to the fact that you may become uncomfortable before you can overeat.

In addition to making people feel full faster, chili powder and many other spices have a thermogenic effect. This results in the body heating itself from within, which revs up the metabolism. The term metabolism describes the sum of all chemical processes that take place in the body. It manages the movement of nutrients in the blood after digestion which results in growth, energy and other body functions. Certain spices cause our bodies to burn extra calories by boosting the metabolic rate and thus stimulating weight loss. Some studies have found that adding thermogenic spices at a meal can increase the number of calories burned by 25% for up to an hour after the meal. Hey every little bit helps! The following spices have been shown to have this effect to some degree:

Black Pepper– Black pepper has been shown to raise the body temperature and increase metabolism. “Found in dried black pepper, piperine may prevent new fat cells from forming,” Web MD. It also has been shown to aid in digestion because when it is eaten, a signal is sent to your stomach to produce hydrochloric acid. This acid is necessary for the digestion of protein and other foods in the stomach. When not enough hydrochloric acid is produced by the stomach, the results can range from gas and indigestion to diarrhea. Black Pepper also has been found to have antioxidant and antibacterial properties.

Chili Powder– Chili powder contains capsaicin, which is a powerful stimulant that raises the body temperature and fat burning ability by up to 25% and has been shown to reduce cholesterol levels and improve circulation. “Research shows that people who don’t typically eat spicy foods are most likely to benefit from turning the heat up a notch. Capsaicin seems to affect metabolism by raising body temperature, which uses up more energy,” Web MD. 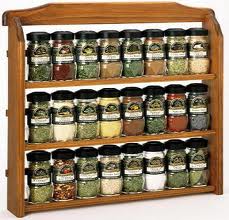 Cayenne Pepper and Tabasco Sauce– According to Scientists at the Laval University in Quebec, participants who took cayenne pepper for breakfast were found to have less appetite, leading to less caloric intake throughout the day. Cayenne is also a great metabolic-booster, aiding the body in burning excess amounts of fats because metabolic rate and fat burning ability is increased by up to 25%.

Cumin– According to a study at the University of Chicago, cumin increases metabolism, especially when used in curry spice blends. It is also high in Iron which directly affects the level of energy you have, in turn helping you exercise more or less. Many people do not get enough Iron in their daily diet which can cause fatigue and/ or Iron deficiency.

Mustard– In a British study, adding ordinary mustard to a meal caused the average metabolic rate of participants to increase by 25% and the effects lasted up to 3 hours. Mustard is high in fat, and while fat provides more calories than carbohydrates and protein, it can aid in dieting, as it induces feelings of fullness. Mustard is also high in dietary fiber which helps in digestion and helps you feel fuller for longer periods of time.

Turmeric– Turmeric helps with weight loss because it increases the activity of your metabolism for short bursts of time after you ingest it. According to LIVESTRONG, it also helps prevent weight gain after the initial weight has been lost (which is just as important). Turmeric prevents the re-growth of fat after weight loss by inhibiting the expansion and growth of fat tissue through the formation of new blood vessels.

Ginger– Has been shown to increase metabolic rate and decrease appetite. It also helps with digestion and regulating your body’s internal rhythm. Ginger is also used to inhibit nausea sometimes caused by car sickness. Not only is ginger an excellent flavor for tea, but we love putting it in our healthy smoothies!

Cinnamon– Researchers have found that using just ¼ to 1 teaspoon of cinnamon can increase your metabolism and improve your body’s ability to handle sugar by stimulating insulin activity. It is also a digestive aid which helps keep everything in your digestive system flowing smoothly. Cinnamon also helps increase energy levels and concentration which have positive effects when it comes to weight loss.

No one can promise weight loss. Consuming these spices is not a magic weight lose bullet. The best way to lose weight is talk to your doctor to make sure that you’re healthy enough to exercise. Once you do start exercising you have to burn more calories than you consume. But it can’t hurt to rev up your metabolism by adding some of these spices for a little extra burn effect (besides they help make your food taste so much better, too).

One thought on “8 Best Spices to Help You Lose Weight”