Many people might claim that, at least at one point in their lives, they could be classified as a “pack rat” or a “closet clutterer.” However, compulsive hoarding is an anxiety disorder that involves much more than keeping extra papers and magazines around, or collecting CDs under your desk. Severe compulsive hoarding can interfere with a person’s activities–such as cooking, cleaning, showering, and sleeping–because piles of newspapers or clothes are found in the sink, in the shower, on the bed, and in every corner of a home.

There is more awareness of the issue today, due in part to the two reality TV series: “Hoarders” and “Hoarding: Buried Alive.” However, there is still so much more educating that needs to be done regarding this issue.

Here, then, are ten things you should know about hoarding. Much of the information was taken from the research of Gerald Nestadt, M.D., M.P.H and Jack Samuels, Ph.D. of the Johns Hopkins University School of Medicine.

1. Compulsive hoarding affects approximately 700,000 to 1.4 million people in the US.

2. Compulsive hoarding is often considered a form of Obsessive-Compulsive Disorder (OCD) because between 18 and 42 percent of people with OCD experience some compulsion to hoard. However, compulsive hoarding can affect people who don’t have OCD.

3. The OCD Collaborative Genetics Study reported that genetic linkage findings are different in OCD families with and without hoarding behavior, suggesting that a region on chromosome 14 is linked with compulsive hoarding behavior in these families and that hoarding is a distinct genetic subtype of OCD. 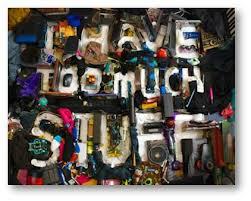 4. The compulsion to hoard often starts during childhood or the teen years, but doesn’t usually become severe until adulthood.

5. Hoarding can be more about fear of throwing something away than about collection or saving. Thinking about discarding an item triggers anxiety in the hoarder, so she hangs on to the item to prevent angst.

6. Many hoarders are perfectionists. They fear making the wrong decision about what to keep and what to throw out, so they keep everything.

7. Hoarding often runs in families and can frequently accompany other mental health disorders, like depression, social anxiety, bipolar disorder, and impulse control problems. A majority of people with compulsive hoarding can identify another family member who has the problem.

8. Compulsive hoarders rarely recognize their problem. Generally, only after the hoarding becomes a problem with other family members is the problem discussed.

10. Cognitive Behavioral Therapy (CBT) may be more effective for compulsive hoarding than medications, especially when it involves a therapist going into the home of the hoarder and helps her to develop habits and a consistent behavioral program to try to de-clutter her home, car, and life.

6 thoughts on “10 Things You Should Know About Compulsive Hoarding”