By now we know that eating more fruits and vegetables is good for our health, but a new study suggests that eating even more produce can prevent millions of deaths each year.

In the report, published in the International Journal of Epidemiology, researchers from Imperial College London conducted a meta-analysis of 95 studies looking at fruit and vegetable intake. They estimated that 7.8 million premature global deaths could be avoided yearly if people ate 10 portions of fruits and vegetables a day.

The researchers characterize 10 portions as 800 grams of fruits and vegetables a day. For context, one medium apple is around 182 grams. 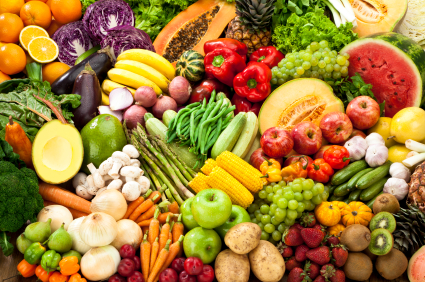 The fruits and vegetables that were linked to lower risk of heart problems included the usual suspects like apples, citrus, and leafy veggies like spinach. Other cruciferous vegetables like broccoli and Brussels sprouts as well as peppers and green beans were linked to potentially lower cancer risk.

The researchers didn’t show why higher portions of fruits and vegetables can led to fewer deaths, but some of the basic nutrients in the produce can improve health. “Fruit and vegetables have been shown to reduce cholesterol levels, blood pressure, and to boost the health of our blood vessels and immune system,” said study author Dagfinn Aune of the Imperial College London School of Public Health in a statement. “This may be due to the complex network of nutrients they hold. For instance they contain many antioxidants, which may reduce DNA damage, and lead to a reduction in cancer risk.”But how realistic is it to ask people to eat up to 10 portions of produce? Considering fewer than 18% of Americans eat the recommended amount of fruit and less than 14% eat the recommended amount of vegetables, that will be a challenge.