Sleep apnea is a common condition. As many as 26% of all Americans may suffer from this condition, in which there are long pauses between breaths during sleep. Unfortunately, many patients with sleep apnea do not tolerate the most effective current therapy, continuous positive airway pressure, or CPAP. For some of these people, a new approach pacemaker therapy may be an alternative.

Pacemakers for sleep apnea? This must be a “typo,” right? Don’t you really mean heart pacemaker? No, this isn’t a typo. Pacemakers are some of the newest treatments for sleep apnea. Before explaining how they work, a short physiology lesson is necessary.

Normally, when you breathe in, air flows from the nose and mouth, past the back of your tongue, through the trachea and down into your lungs. This occurs because nerve signals from the brain activate the diaphragm to produce inspiration. The resulting negative pressure pulls air in. However, these nerve signals also stimulate muscles surrounding the throat, including the tongue to contract in order to prevent the airway from being suctioned closed with breathing. Sleep apnea occurs when these processes fail during sleep, and consequently air does not enter the lungs.

There are two types of sleep apnea. The most common is obstructive sleep apnea, which occurs when there is repetitive collapse of airway at the back of the throat. In obstructive apnea, the stimulus to the throat muscles is insufficient to prevent their collapse and the airway becomes blocked. Less common is central sleep apnea. In central apnea, nerve signals from the brain are absent for prolonged periods of time, and there is no effort made to breathe during these intervals.

In a recent study, pacing of the hypoglossal nerve in the neck during sleep was effective treatment for people with moderate to severe obstructive sleep apnea. Twelve months after pacemaker insertion, the average number of obstructed breathing events decreased by approximately 50%. In addition, nighttime oxygen levels improved, as did measures of quality of life and daytime sleepiness. There were few side effects.

How does the hypoglossal pacemaker work? The pacemaker has three major components. The first is the stimulation electrode, which is surgically implanted on one hypoglossal nerve (there are two nerves, right and left). The second is a sensing electrode, which is surgically inserted in the chest and detects when a person starts to inhale. The third is the electrical generator, which supplies battery power for the pacemaker. When the sensing electrode identifies the start of a breath, it signals the stimulation electrode to activate the hypoglossal nerve, which is the primary nerve to the tongue. This causes the tongue muscle to stiffen and resist airway closure, thus preventing apnea.

Although the hypoglossal pacemaker sounds like a dream come true for people with obstructive sleep apnea who have trouble using continuous positive airway pressure (CPAP), it has not been used in large numbers of patients to date. Two reasons have hindered widespread use––cost (about $30,000) and lack of data showing effectiveness in patients who are severely obese. This is important because two-thirds of people with obstructive sleep apnea are overweight or obese. The insertion procedure is not complicated, although it requires a brief surgical procedure and follow-up to adjust the pacemaker settings. However, as more experience with it accumulates, usage of this novel therapy may increase.

Central sleep apnea also may be amenable to pacemaker treatment. Central apnea frequently is observed in patients with heart failure, and is difficult to treat. Recent studies show that a pacemaker inserted through a central vein, in a manner similar to placement of a heart pacemaker, can stimulate the phrenic nerve, which controls contraction of the diaphragm. This pacemaker senses the absence of any effort to breathe and then activates the phrenic nerve. The phrenic nerve then causes the diaphragm to contract, initiating inspiration. The studies show that central apneas decrease and sleep quality improves. Although the pacemaker is not yet available in the United States, FDA approval may be forthcoming. 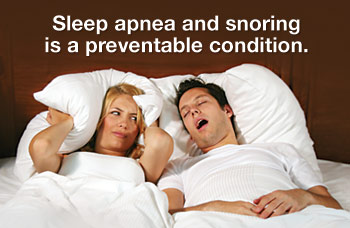 Diabetes. Diabetes is associated with sleep apnea and snoring. It is not clear if there is an independent relationship between the two conditions or whether obesity is the only common factor.
Gastroesophageal Reflux Disease (GERD). GERD is a condition caused by acid backing up into the esophagus. It is a common cause of heartburn. GERD and sleep apnea often coincide. Research suggests that the backup of stomach acid in GERD may produce spasms in the vocal cords (larynx), thereby blocking the flow of air to the lungs and causing apnea. Apnea itself may also cause pressure changes that trigger GERD. Obesity is common in both conditions, and more research is needed to clarify the association.
Polycystic Ovary Syndrome (PCOS). Obstructive sleep apnea and excessive daytime sleepiness appear to be associated with polycystic ovary syndrome (PCOS), a female endocrine disorder. About half of patients with PCOS also have diabetes. Obesity and diabetes are associated with both sleep apnea and PCOS and may be the common factors.

Sleep apnea can lead to a number of complications, ranging from daytime sleepiness to possible increased risk of death. Sleep apnea has a strong association with several diseases, particularly those related to the heart and circulation.

Daytime sleepiness is the most noticeable, and one of the most serious, complications of sleep apnea. It interferes with mental alertness and quality of life. Daytime sleepiness can also increase the risk for accident-related injuries. Several studies have suggested that people with sleep apnea have two to three times as many car accidents, and five to seven times the risk for multiple accidents. Undertreated sleep apnea is a major risk factor for injury at factory and construction work sites.

Effects of Sleep Apnea on Heart and Circulation

Other Adverse Effects on Health

Sleep apnea is associated with a higher incidence of many medical conditions, besides heart and circulation. The links between apneas and these conditions are unclear.

Because sleep apnea so often includes noisy snoring, the condition can adversely affect the sleep quality of the bed partner. Spouses or partners may also suffer from sleeplessness and fatigue. In some cases, the snoring can disrupt relationships. Diagnosis and treatment of sleep apnea in the patient can help eliminate these problems.

Effects in Infants and Children

Failure to Thrive. Small children with undiagnosed sleep apnea may “fail to thrive,” that is, they do not gain weight or grow at a normal rate and they have low levels of growth hormone. In severe cases, this may affect the heart and central nervous system.
Attention Deficits and Hyperactivity. Problems in attention and hyperactivity are common in children with sleep apnea. There is some evidence that such children may be misdiagnosed with attention-deficit hyperactivity disorder. Even children who snore and do not have sleep apnea may be at higher risk for poor concentration.
09/19/2012
Harvey Simon, MD, Editor-in-Chief, Associate Professor of Medicine,
Harvard Medical School; Physician, Massachusetts General Hospital.
Also reviewed by David Zieve, MD, MHA, Medical Director, A.D.A.M. Health Solutions, Ebix, Inc.
source: umm.edu