There are plenty of fish in the sea, but finding the best fish and seafood took thorough analysis. We started with a list of the 20 most popular types of seafood in the U.S. (which explains why hairy anchovies are missing). Using the latest FDA data and a serving size of 3 ounces, we calculated the omega-3 (DHA and EPA) content of each fish, plus other nutritional perks like selenium, a mineral that bolsters cancer-fighting antioxidants, and B12 vitamins, which are crucial to nerve health. Then we factored in average levels of toxins like mercury and PCBs. The result: a safe seafood and fish list that will let you navigate the fish counter like Captain Ahab.

1. Salmon (the wild kind) wins by a waterslide, and is a healthy fish you can count on to pack in nutrition. Most varieties, including coho and sockeye, provide more than three times the 250-mg recommended minimum daily dose of omega-3s. Wild Atlantic salmon is king of the sea with a mighty 1.6 g of the good stuff and a mini mercury count of 0.01 ppm. A serving also gets you 72 percent of your 55-mcg RDA of selenium. Avoid Farmed salmon, which may contain PCBs from polluted water. 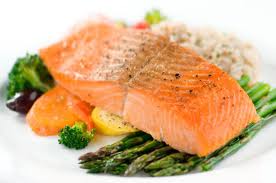 2. Rainbow trout (the farmed kind) gets the silver medal for a full gram of omega-3s. Tests on mixed varieties of trout show only 0.07 ppm of mercury, and farmed may contain even less. It also boasts more than twice the 2-mcg RDA for B12 and half the 15-mg RDA for niacin, which lowers bad cholesterol and plays a key role in metabolism.

3. Oysters (from the Pacific) are almost devoid of mercury (0.01 ppm) and pack 1.2 g of omega-3s per 3 oz. Each slippery serving also delivers more than twice the 12-mg RDA of immunity- and libido-boosting zinc. Avoid Wild Eastern and American oysters — they may contain PCBs.

4. Striped bass (if farmed) is not known to contain mercury in any measurable quantity, and packs 0.8 g of omega-3s, more than twice the suggested minimum. Bonus nutrients include about double the RDA of B12 and 72 percent of your daily selenium. Avoid Mercury-laden wild striped bass (0.22 ppm).

6. Flounder and sole are nutritional twins and contain a healthy 0.4 g of omega-3s and just 0.04 ppm of mercury. A single serving has nearly 100 percent of your daily RDA of selenium and B12. Avoid Blackback and Summer varieties — they can pack PCBs.

7. Alaskan king crab deserves its crown as the crustacean with the biggest omega-3 bang (0.4 g) and a piddly 0.06 ppm of mercury. It’s low cal (82 calories per 3 oz), and it contains 50 percent of your zinc RDA and — check it out — five times your B12 RDA. Avoid Blue crab, which has higher levels of PCBs and mercury.

8. Perch (freshwater). One serving provides over 100 percent of your omega-3 minimum, almost all of your selenium (47 mcg), and half of your B12, with no measurable mercury. So eat up!

10. Scallops have a meaty texture even steak lovers can appreciate. Both the bay and sea varieties are heart friendly, with 0.3 g of omega-3s, more than half your B12 RDA, and only a hint of mercury (0.05 ppm).

11. Shrimp are a dieter’s dream at only 84 calories per serving, with 0.3 g of omega-3s and a super-safe mercury level of 0.05 ppm. The drawback: A serving of shrimp has 166 mg of cholesterol (almost as much as an egg), so if you’re watching your cholesterol, don’t eat the pink critters more than once a week.

14. Tilapia is a freshwater dweller similar to catfish. Though it has only 0.1 g of omega-3s, tilapia is nearly free of mercury (0.01 ppm) and contains 84 percent of your daily selenium and 79 percent of your B12. So you can eat it till the sharks come home.

You May Want To avoid-tilapia-and-farmed-fish


16. Canned tuna (light). It’s saddled with more mercury (0.12 ppm) than most fish on this list, but it has the least of all other types of tuna and still provides 0.2 g of omega-3s. Eat it no more than eight times a month and feel good about getting 75 percent of your niacin RDA and more than 100 percent of your selenium and B12.

17. Cod (from the Pacific) supplies almost twice the omega-3s of Atlantic cod (0.2 g vs. 0.1 g) and racks up 72 percent of your selenium for just 89 calories a serving. But don’t dine on it more than twice a week, because its mercury count is on the high side (0.1 ppm).

18. Halibut is a very good source of omega-3s (0.4 g) and provides more than 40 percent of your RDA of niacin, 72 percent of your selenium, and 58 percent of B12, so eating it every once in a while is a healthy option. Just keep it to no more than four meals per month because its 0.2-ppm mercury count is twice as high as cod’s.

19. Skipjack tuna is smaller than bluefin or yellowfin and therefore soaks up fewer toxins. It delivers an impressive 0.3 g of omega-3s, 72 percent of your selenium RDA, and 93 percent of B12. Still, it has 0.2 ppm of mercury, so limit it to four meals a month.

20. Orange roughy has two strikes against it: minimal omega-3s (0.02 g) and way more mercury (0.6 ppm) than any other fish listed here. But it’s low in calories and high in protein and selenium (75 mcg). So if you’re craving it, go ahead — just not more than once a month.

2 thoughts on “The Most Healthy Fish And Seafood”