The way we feed children may be just as important as what we feed them.

By Claire Farrow, Emma Haycraft, Jackie Blissett / The Conversation May 16, 2016

Food can be an extremely effective tool for calming young children. If they are bored on a long car journey, or fed up with being in the pushchair, many parents use snack foods to distract them for a little longer. Or if children are upset because they have hurt themselves or want something they cannot have, the offer of something sweet is often used to “make them feel better.”

But what are the effects of using food as a tool to deal with emotions like boredom or sadness? Does it turn children into adults who cannot cope with being bored or upset without a sweet snack? Probably not. There certainly isn’t any evidence to suggest that occasionally resorting to the biscuit tin will affect children in this way. But what if we do it on a regular basis? What happens when sweets and biscuits become the tool for rewarding children for good behavior and doing well? Or if food is consistently withheld as a punishment?

There is a growing body of evidence which suggests that using food as a tool or as a reward regularly with children may be associated with a greater risk of emotional eating. In a recent study we explored whether children as young as three preferred to play with toys or eat snack foods if they were feeling stressed.

All the children had just eaten lunch so were not hungry, and were then observed to see what they did in a four minute period – eat or play with toys – whilst waiting for someone to look for a missing final piece of a jigsaw. Children aged three to five did not tend to eat much more in comparison to a control group. However, in a similar experiment when the children were two years older, we found many of the children would eat foods when they were not hungry (emotional overeating), rather than play.

It appears that somewhere between the ages of four and six, the tendency to emotionally overeat may increase in many children. And parents who told us they frequently used food as a reward (or its withdrawal as a punishment) when their children were younger, were more likely to have children who emotionally overate when they were aged five to seven. This suggests that frequent use of food as a reward or punishment in that younger period may predict a greater chance of children using food as an emotional tool later in life.

Of course you may be thinking that your own exposure to “reward” foods hasn’t had any lasting impact on your current eating behavior. But it is worth considering how society has changed in the last few decades to market and promote high calorie foods to children. Many people believe we live in an “obesogenic society,” where our environment has evolved to promote obesity rather than support healthy eating. The fact that around a third of English school children are overweight or obese is testament to this. With grab-bag sized bags of chocolates being promoted to children, supersized portions in fast-food outlets and even clothes shops selling sweets at children’s eye level in queues, it is clear our children need to adapt to cope with constantly being marketed large portions of high calorie foods.

So how can we navigate this complex environment, juggling the balance of making food enjoyable and sociable, whilst helping children to achieve a healthy and balanced diet? Sweet foods are a fun part of life and not necessarily something we want to remove. Even if we eliminated all links between food, emotion and reward in the home, the reality is that society is full of situations where children will experience being given calorie dense foods as a reward or as part of celebrations. It would be a pity to take away the joy that children find in party bags, birthday cakes, Easter eggs and other celebration foods. Perhaps thinking about not just what foods we give children, but also how and why we give certain foods to children at particular times is a good way to start.

Teaching children how to manage their appetites, to eat if they are hungry and to stop if they are full, is an important lesson which is often overlooked.

Eating patterns can usually be tracked across life, so children who learn to use food as a tool to deal with emotional distress early on are much more likely to follow a similar pattern of eating later in adult life. Around three quarters of children who are obese will continue to be obese as adults. Emotional overeating is one factor that has been linked not only with overeating and obesity, but also with the development of eating disorders. To combat this, the way we feed children, and the lessons we provide about how to use food, may be just as important as what we feed them.

As Oscar Wilde once said: “I can resist anything except temptation.”

That’s something most of us can relate to. If you’re not one of us, then well done.

For the rest of us, though, there will come a time when we need to ‘not’ do something we want to do. Don’t smoke that cigarette, don’t eat that cake, or skip the soda!

As nice as life is, it is often one long list of temptations that need to be avoided. So what do we do when we are having trouble saying “no” or are fearful of trying something new? We dig deep for the willpower to push us through. Sometimes that’s easier said than done.

TO HELP US OUT, HERE ARE FIVE WAYS TO STRENGTHEN OUR WILLPOWER:

In the words of Greg S. Reid: “A dream written down with a date becomes a goal. A goal broken down into steps becomes a plan. A plan backed by action makes your dreams come true.”

There are three critical components of that statement:

We are often guilty of short-term thinking, only seeing what is in front of us. Instead, we should be looking at a bigger picture. So start by writing it down. It will help you become crystal clear about the direction you want to head. Then break it down into manageable parts, so the big goal seems attainable. Then, find the willpower within to take the first step and when you do, your willpower will grow stronger. It’s like a muscle, and it gets better with exercise. So exercise it!

Avoid situations where there is a need to make tough decisions. Tough decisions will deplete willpower fast. For example, a person who wishes to stop drinking would do well to avoid bars for a while. However, hanging out at the juice bar at the gym will help strengthen willpower, because there isn’t a difficult choice to make. 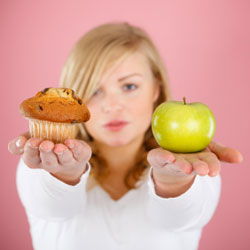 Yes, when we do good things we like to be rewarded. Collect the money saved from not buying that packet of cigarettes. Collect in a jar and keep it visible. After a period, take the money and splurge on something frivolous like a spa day or new pair of boots. Like any other goals you have written down, focus on them, visualize them and embed that picture in your mind, permanently.

You strengthen your willpower when you remain focused on positive results. Draw on those feelings of success when faced with difficult choices, and you’re more likely to choose wisely.

Accountability partners are a great way to strengthen our willpower because we are more likely to do what we are supposed to do when we have to report back to someone. The added benefit is we get to call on the willpower of our partner when our willpower is lacking. Friends can achieve a lot together; that’s why they’re friends, and everyone can find a friend or a colleague who has similar goals.

Look at it another way; there is a reason that ‘clubs’ are popular, things like gyms, weight watchers, etc.  They will keep us honest, grounded, and moving forward.  Now, you don’t necessarily need to join a club; just gather a few friends and set up an accountability group.

If there have been times in the past when we have fallen at the feet of temptation, remember those times and gather strength from them. We should never, ever, take our eye off the prize. Think about it; what changed?  Was it:

The dream dress we’re trying to squeeze into? Unlikely.

Any other goal? Unlikely.

Instead, we probably gave in to temptation once, then twice, then three times and soon realized we failed. So we gave up. We will continue to fail until the time we don’t and that time maybe the next time.

Making change is hard. In fact, we are designed to resist change. So it might be unrealistic to think we can get there on the first try. But with each try and a clear focus on the goal, you will build the willpower to keep trying until you get it right.

Face it, without a little failure we would have no stories to tell or lessons to learn. Think once again about the goal and measure the triumphs one step at a time. When we stay the course, make a plan, avoid situations that will make things more challenging, find some friends, and then reward ourselves for each step, we will soon learn the day of achieving our big goals is closer than we think.