The main issue is finding time to read labels and figuring out what they really mean, experts say.

Most of us have probably heard that food marketers play it a little fast and loose with health claims.

So how much of what we read on a label can we trust? What, exactly, makes my bag of cereal clusters “lean,” for example? We asked two Toronto registered dietitians to separate fact from fiction to make it easier for us to navigate the grocery aisle. And the first thing we learned is that, even though there are tricky terms out there, words still have meaning and many of them are actually tightly regulated.

“The truth is, the Government of Canada, specifically the Canadian Food Inspection Agency, does govern many of the terms that are seen on food packages,” explains Cara Rosenbloom, a registered dietitian and co-author of the book, “Food to Grow On.” “So, calories, salt, fat, saturated fat, cholesterol, sugar, fibre, vitamins and minerals, all of these are all highly regulated.”

Even though the nutritional world has softened its stance on cholesterol, most people like to see the words “No Cholesterol” on a package. Often, though, those words are found on foods that never would have contained cholesterol in the first place.

“Some clients can get confused as to what cholesterol is and where it comes from,” says Amanda Li, registered culinary dietitian and founder of Wellness Simplified, a practice in Toronto. “It only derives from animal products, but marketers know that not everyone knows that and use that to their advantage, because people think it’s better for their heart.”

Similarly, the term “gluten free” is slapped on a lot of packages, from potato chips to coleslaw, even though gluten comes from grains, most commonly wheat, barley and rye. “I’ve seen the words ‘gluten free’ on water,” says Rosenbloom. 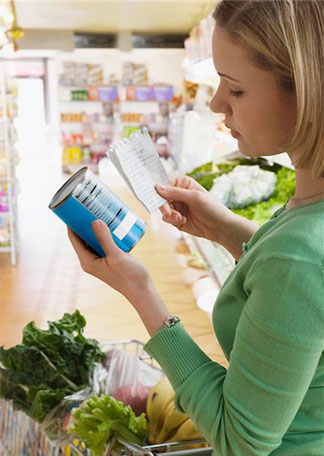 “The other one I see a lot that is a source of irritation is ‘no refined sugar,’” says Rosenbloom, who says that a lot of consumers infer that product is sugar-free.

Sadly, there are a lot of sugars that come from a less-refined source, such as agave syrup or honey, that sneak through on a technicality. That doesn’t make these sugars any healthier, though.

“At the end of the day, your body just knows it’s had sugar,” says Li. “People think maple syrup is better just because it contains tiny amounts of minerals, but there are much better ways to get minerals.”

Made with “Real Fruit”

“The other thing that bothers me is when a food package says ‘made with real fruit,’” Rosenbloom says. “Like, for example, there are ‘real fruit’ gummies which are literally candies made by taking some fruit juice concentrate and turning it into a sugar.”

The same is true for many “plant snacks” (including veggie straws and chips) that appear to be “healthier” choices but may not be any better than a (gluten free and cholesterol-free) potato chip. It’s worth pointing out that potato chips are also plant-based, they’re just plant snacks with an image problem.

“I like to call them hyper-palatable foods,” says Li. “Moms often say ‘I give my kids veggie chips’ and I’m not sure if they understand that they aren’t really vegetables. Most of them are just a lot of refined carbohydrates.”

Rosenbloom says she’s seen school lunch boxes packed with fruit candy and veggie straws and known that parents think they’ve done a great job and covered all the major food groups. “It tricks many Canadians into believing they are eating fruits and vegetables when they’re not getting the real deal.”

If we had the time to really think about what we were buying at the grocery store, we’d be able to see through a lot of meaningless sales pitches on packaging. The problem, especially for parents, is that time is a precious resource and decision fatigue is a real thing.

Marketers know that. Which is why, over the past decade, a lot of food has been rebranded as accessories to wellness culture. Increasingly, food is packaged in shiny white bags that are decorated with a splotch of green or eye-catching pictures of colourful fruits that pop, all of which give it what American nutritionist and food studies scholar Marion Nestle calls a “health halo” — a carefully constructed image that often hides yet another ultra-processed food.

So, it’s not so much that you can’t believe anything you read, since a fair bit of the information on packages is actually quite reliable. It’s finding the time to do it that’s the real problem.