When we ask ourselves what makes us happy, we often think of the circumstances, possessions, or people in our lives. In reality, happiness is largely a chemical experience. Four main neurochemicals, hormones, and neurotransmitters generated in the brain are fundamentally responsible for creating the sensations and emotions we’ve come to associate with happiness.

This is actually great news. It means even when circumstances, possessions, or people in our lives aren’t exactly as we’d like them to be, there are simple ways we can increase our happy brain chemicals and alter our moods.

I talk about this with my mindfulness students in elementary school, and they really understand the concept. I’ll often have a kid tell me about the rush of dopamine she just got from getting an A+ on her spelling test, or the hit of oxytocin a boy felt from giving his mom a hug.

Here’s how you can do the same.

Endorphins are opioid neuropeptides, which means they are produced by the central nervous system to help us deal with physical pain. They also make us feel lightheaded, and even giddy at times. One non-painful (well, not too painful) way to induce endorphins is exercise.

Endorphins are released after both aerobic and anaerobic exercise. In one study, as little as 30 minutes of walking on a treadmill for 10 days in a row was sufficient to produce a significant reduction in depression among clinically depressed subjects. 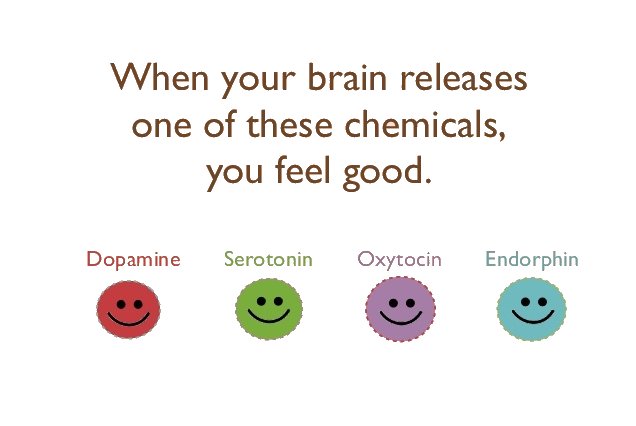 Serotonin may be the best-known happiness chemical because it’s the one that antidepressant medication primarily addresses. Serotonin is a neurotransmitter that is naturally triggered by several things we can do each day.

Exposure to bright light, especially sunshine, is one way to increase serotonin. Exercise and happy thoughts also stimulate production of this chemical. Some research has found that a higher intake of tryptophan-heavy foods, relative to other foods in the diet, may do the trick as well.

Dopamine is a neurotransmitter often referred to as the “chemical of reward.” When you score a goal, hit a target, or accomplish a task, you receive a pleasurable hit of dopamine in your brain that tells you you’ve done a good job. But you can also get a natural dose of dopamine when you perform acts of kindness toward others.

Volunteering has been shown to increase dopamine as well as have other long-term health benefits. And some research has even found that it only takes thoughts of loving kindness to bring on the dopamine high.

Mothers may be familiar with oxytocin, the hormone produced in abundance during pregnancy and breastfeeding. It’s also the high behind MDMA, a popular party drug, which releases oxytocin in the brain. Oxytocin is primarily associated with loving touch and close relationships.

This hormone provides a multiple whammy of warm fuzzies, by stimulating dopamine and serotonin, while reducing anxiety. To get your hit of oxytocin without popping ecstasy, give someone you love a cuddle. Even a pet will do.

If you’re like me, happiness may at times feel like the unachievable holy grail of emotion. But luckily, our brains and bodies are constantly undergoing complex chemical processes that we can affect with our daily actions. Once we understand how our feel-good hormones and neurotransmitters work, we may be able to trigger them more easily than we realized.