Next time you eat a piece of chocolate, you may not have to feel overly guilty about it.

Despite its bad reputation for causing weight gain, there are a number of health benefits associated with this delicious treat.

Chocolate is made from tropical Theobroma cacao tree seeds. The earliest use of chocolate dates back to the Olmec civilization in Mesoamerica.

After the discovery of the Americas, chocolate became very popular in Europe, and its demand exploded.

Chocolate has since become an incredibly popular food product that millions indulge in everyday for its unique, rich, and sweet taste.

But what effects does eating chocolate have on our health?

This MNT Knowledge Center feature is part of a collection of articles about the health benefits of popular foods. It provides details on the possible health benefits of chocolate as well as some risks and precautions that you may want to be aware of. Included throughout are links to relevant studies and articles.

The potential health benefits of chocolate

Throughout the years, chocolate has been on the end of a lot of bad press because of its fat content, and its consumption has been associated with acne, obesity, high blood pressure, coronary artery disease and diabetes.

However, “the recent discovery of biologically active phenolic compounds in cocoa has changed this perception and stimulated research on its effects in ageing, oxidative stress, blood pressure regulation, and atherosclerosis. Today, chocolate is lauded for its tremendous antioxidant potential.”

The potential benefits of eating chocolate may include:

It is important to note that the possible health benefits mentioned discuss one-off studies and more evidence is required before the links can be said to be conclusive.

A study published in The Journal of Nutrition was carried out to determine whether chocolate bars containing plant sterols (PS) and cocoa flavanols (CF) have any effect on cholesterol levels.3

The study authors wrote “results indicate that regular consumption of chocolate bars containing PS and CF as part of a low-fat diet may support cardiovascular health by lowering cholesterol and improving blood pressure.” 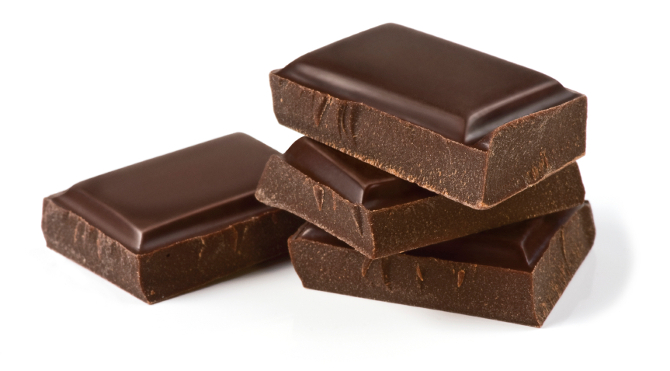 Scientists at Harvard Medical School suggest that drinking two cups of hot chocolate a day may help keep the brain healthy and prevent memory decline in older people. The researchers said that hot chocolate can help preserve blood flow in working areas of the brain.4

“As different areas of the brain need more energy to complete their tasks, they also need greater blood flow. This relationship, called neurovascular coupling, may play an important role in diseases such as Alzheimer’s.”

Research published in the BMJ (British Medical Journal) has suggested that consuming chocolate could help lower the risk of developing heart disease by one third. The report was presented at the European Society of Cardiology Congress in Paris, France.5

Risks and precautions for chocolate

Chocolate has a high calorie count, containing large amounts of sugar. Therefore, if you are trying to slim down or maintain your weight, it may be a good idea to set a limit on your chocolate consumption. The large amount of sugar in most chocolates can also be a cause of tooth decay.

In addition, there is research suggesting that chocolate may cause poor bone structure and osteoporosis.

One study, published in The American Journal of Clinical Nutrition, was carried out to identify the relationship between chocolate consumption and bone density in older women.8

The authors concluded that “older women who consume chocolate daily had lower bone density and strength”.

Further reading
If you enjoyed reading about the potential health benefits of chocolate, take a look at our collection of articles about other foods.

related article: Chocolate: is it really good for our health?
source: www.medicalnewstoday.com